A Hindu man was verbally attacked in a hate incident by another man at a Taco Bell in Fremont, California.

Krishnan Jayaraman was waiting to pick up his order at a Fremont Taco Bell on Grimmer Boulevard when another customer began to verbally attack him on Aug. 21.

In an 8-minute video recorded by Jayaraman, the man can be heard spewing anti-Hindu speech.

“Walking around with your f*cking toes out. B*tch, this ain’t India,” the man says. “You f*cked India up. You’re f*cking America up.”

The man also repeatedly calls Jayaraman “disgusting” and “nasty,” telling him to not come out in public. At one point, the man also spits at Jayaraman.

In an interview with ABC7 News, Jayaraman recalled the man stating, “You’re a Hindu who bathes in cow urine.”

Jayaraman did not engage with the man.

“I was scared to be honest with you. I was infuriated on the one hand, but I was scared that what if this guy becomes too belligerent and then comes after me?’” Jayaraman told NBC Bay Area.

“I didn’t see a point of me trying to engage somebody who’s hell-bent on picking up a fight and wanting me to engage,” he told ABC7 News. “He was so close to my face. He was throwing his dollars on my face. He was spitting everywhere.”

Jayaraman was surprised to hear the man pronouncing Hindi words and speaking Punjabi towards the end of the video. He believes that the attacker is also of Indian descent but aligns with an independence movement in northern India.

“That group, the Khalistan group was deemed a terrorist organization in India,” Jayaraman said. “At that point, it dawned upon me that he may be somebody who has an ulterior motive to do all these things.”

Taco Bell employees did not intervene to deescalate the situation, according to Jayaraman. The fast-food restaurant company has not commented on the incident.

The Fremont Police Department is actively investigating the incident. There are currently no reports on whether the attacker will face charges.

“We take hate incidents and hate crimes seriously, and understand the significant impact they have on our community. These incidents are despicable,” Police Chief Sean Washington wrote. “We are here to protect all community members, regardless of their gender, race, nationality, religion, and other differences. We would like to urge the community to be respectful of each other and to immediately report any circumstances such as this that, upon investigation, may rise to the level of a crime.”

“In the event of a hate crime, we will devote all available resources to follow up and investigate,” he added. “Fremont is one of the nation’s most diverse communities, and we are thankful for the contributions of community members from different cultures and backgrounds.” 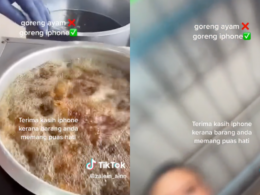 Video: What happens when an iPhone is dropped into boiling oil?