Seven business owners at the International Plaza on East 9th Avenue and International Boulevard woke up to discover their stores raided on Monday.

Oakland police Chief LeRonne Armstrong said the break-ins happened around 4 a.m. A witness told KTVU that she reported the incident to the police at about 4:30 a.m.; however, dispatchers were not notified until 6:20 a.m., according to Armstrong. The burglars had already fled the scene by the time police arrived at 7:15 a.m.

“It was blatant; it was intentional; it seemed like they were determined because it wasn’t just one storefront but seven storefronts,” Tran reportedly said.

They ransacked an entire strip mall in Little Saigon before dawn, breaking in via roofs & popped locks. But one guy actually went back & apparently gave the local homeless guy some spare change. Merchants speak out. @oaklandpoliceca investigating. 4,5, 6:30, 7 p.m. @KTVU pic.twitter.com/uxJpG7lzQQ

Nolan Wong, the owner of International Coin Laundromat, said the burglars were armed with tools and dressed in hoodies. They entered his store by drilling a hole in the roof and kicking out a ceiling panel, undeterred by the alarm they set off.

“I found my whole place was ransacked,” Wong told the San Francisco Chronicle. “Five or ten minutes later, the owner of the restaurant at the corner started screaming. He found out his palace was broken into. Then I noticed the locks were broken on other businesses. I looked inside, and they were all ransacked.”

The incident is reportedly the second time Nolan’s business has been broken into this year. The thieves were captured on a surveillance camera trying to open a coin machine for over 30 minutes before they got away with around $5,000.

“Whether it took five minutes or an hour, they didn’t care. That’s the scary part,” Wong told NBC Bay Area. “They came multiple times to go gather themselves, get their tools, come back in and break into the machine.”

Two other businesses were also broken into through their roofs, including Simon Liu’s Vietnamese restaurant V & J Fusion.

“All seven stores here got burglarized in a span of like less than two hours,” Liu told KTVU. “The robbers came down through the roof. There’s a hole in my hallway right now. The damage is more than the money that they took.”

The burglars had also shattered windows and popped the locks of four other businesses.

“Mayor [Libby Schaaf], please do something because this area is hit so often…we are struggling here,” Jimmy Ngo, the owner of the nail salon that was burglarized, reportedly said.

Some business owners blamed the Oakland police for taking too long to respond to the scene. Officers, however, did spend hours after the incident gathering surveillance footage and statements.

She asked the public to donate to the Oakland Vietnamese Chamber of Commerce’s fundraiser for private surveillance cameras in the online campaign Violence Prevention and Public Safety in Oakland Little Saigon.

No arrests related to the strip mall’s burglary have been made. Anyone with information regarding this case is urged to contact the Oakland police at 510-238-3951. 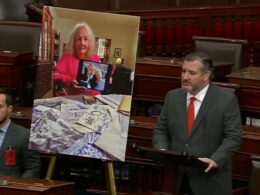